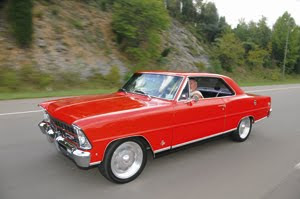 While it is a given that smaller hands in poker do not stand a chance against the likes of a royal flush, having “deuces” in hand will always be special to fans of Chevrolet’s economy supercar.

After all, the Chevy II was quickly “slanged” by hardcore enthusiasts with that winning moniker early on, and most of those same enthusiasts will still tell you that the 1966-’67 Chevy Nova SS is considered be the pinnacle of factory development on one of the company’s longest-running models (1962-1979). When redesigned for 1966, the body lines were crisp and tight, and engine options now included the stout L79 Corvette 327/350hp engine (although only a handful of them were so equipped after 1966, at the very end of the 1967 model year, using the 325-horse version of the engine).

The Chevy II was priced right when new and therefore sold in large numbers, even after its new protégé – the Camaro – arrived on the scene for the ’67 model year. From the stripped down six-cylinder models to the highest-optioned Nova SS examples, the classic design in its two-door configuration has since been used for countless street car projects. The car’s performance heritage dates back to its earliest days, when Bill “Grumpy” Jenkins and Dick Harrell were drag racing them in front of cheering crowds. There were others, but the earliest Chevy IIs frankly lacked style. The 1968 and later versions, popular as they are, do not show the simplicity of this second-generation design.

Conservatively modified, Alan and Nancy Gagnon’s 1967 Nova SS stands out in any crowd, now covered with beautiful GMC Fleet Red Centari paint, and careful lines and letters applied by Jimmy Ross of Indiana. While many guys like to begin a project from scratch, Alan, a retired firefighter, admits it was luck that helped land the car into his personal garage back in April 2000. “A friend of mine had owned and restored this car,” the Crossville, Tennessee, resident laughs. “I caught him at a weak moment and he sold it to me!”

That said, part of any reworked car’s ownership is personalization, and Alan has added many touches to make trips of any length more enjoyable. This includes creature comforts like air conditioning, cruise control and a tilt wheel, while driving prowess has been improved with power steering, power ’70 Chevelle disc brakes, a CCP mini-subframe, trim work and more.

Of course, it’s all about power when we are talking about sporty-looking 1960s-era cars, and Alan stuck with a nice and simple ZZ3 crate motor, the GM Performance Parts 350-cid package. While the engine has never been apart and is basically stock with 9.6:1 compression (extras include a 750cfm Holley double-pumper, Hooker headers and Optima battery), it still made 360 horses (the paper rating from GM is 345) on the dyno, which is solid power in a body weighing less than 3,000 pounds.

Since buying it, he and Nancy have put over 35,000 miles on the Nova SS. This included a stint on the Hot Rod Power Tour, 2,700 miles in five days, and 8,000 miles on the TKO conversion. He proudly states it has never been trailer-carried to any event.

That would be a great testimonial for even a marginally-built car, but the Nova SS has won many awards as well, including no less than five first place honors at Chevy VetteFest in Chicago, a four-time Super Chevy winner, first place at Bow Tie Boulevard, the 2009 Nova National Street Class first place, and more. Quite a list for a car that was driven to those events!

Alan is quick to give credit where it is due. Under “Special Mentions” on our technical form, he wrote – “My loving wife, Nancy, for all of her understanding and patience with me.”

When the Deuces ran wild ...

While the Corvette was the machine of choice for road racing (with a few Corvairs thrown in for good measure), things were unique in 1966. The Chevelle had gathered street fans with the 396 Z16 option of 1965, which became the SS396 in 1966; the Camaro was still on the drawing boards, leaving the Chevy II as an alternative model. Adding the L79 350hp 327 engine made it competitive in drag racing. Indeed, the power-to-weight ratio was good enough that it “conveniently” fit into the A/S class of NHRA Stock Eliminator, which is where Chrysler’s new 426 Street Hemi in stripped-down versions of the Plymouth Belvedere also found a home.

During 1966, Bill “Grumpy” Jenkins and header designer Jere Stahl, both from Pennsylvania, raged an all-out battle for supremacy at the larger NHRA events for both class and Mr. Stock Eliminator crowns. Jenkins was just a little off as the season wound down, and Stahl ended up with the title that year, but the “Mouse that Roared” became part of the storied of Chevy’s “no, we don’t race” legacy of the 1960s (the factory had ended its formal participation in 1963).

Of course, the Camaro would take its role as the Chevrolet’s performance standard-bearer, though versions of the Chevy II remained visible in the growing ranks of funny cars. Popular drivers like Dick Harrell (through team member Jim Kirby with a roadster design) and Jungle Jim Liberman continued on using the body style. Today, 1966 and 1967 Chevy II models continue to race in NHRA’s Stock and Super Stock classes, as well as bracket cars.