It’s 2010 and we are on the road again for an exciting show schedule. Stop by and visit us when we are in a town near you.


This is a tentative schedule, please be sure to double check show dates and times with the event’s host before making any travel plans.
Posted by YearOne at 10:19 AM 114 comments:

“We want to salute the American muscle car and the men who built speed parts for them and then raced these iconic machines. Vic Edelbrock is one of those guys who is still doing that today so we created this car as a tribute to his career.” said Year One President Kevin King. The car carries Edelbrock’s #27 race number.

Built with parts from Year One’s Mustang catalog, it features a Dynacorn uni-body, Global West suspension, Wilwood brakes, Flaming River steering and BF Goodrich race tires. It’s powered by a Ford Racing 347 stroker with a Competition Cams valve train and Edelbrock cylinder heads, intake and carburetor. The winner of the car will also receive a helmet and driving suit from Race-Quip. The sweepstakes runs through July 15, 2010. Kevin King will award the car to the winner on September 28 and that presentation will air on PowerBlock November 20-21.

The promotion will be advertised on HorsepowerTV, Trucks!, Xtreme 4x4 and Muscle Car TV shows as well as in PowerBlock the Magazine, powerblockTV.com and the mypowerblock.com social community. It is open to US and Canadian residents.

Installing a 5 speed Transmission In A 69 Camaro 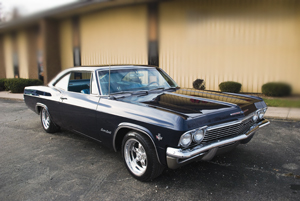